This author has yet to write their bio.Meanwhile lets just say that we are proud Admin contributed a whooping 42 entries.

The Public Interest Litigation filed in the Supreme Court seeking probe into alleged mass killings during the counter-insurgency period in Punjab has been withdrawn with liberty to move the Punjab and Haryana High Court.

The petition filed by an NGO named Punjab Documentation and Advocacy Project (PDAP) and some individuals sought constitution of a Special Investigation Team (SIT) or an investigation by the Central Bureau of Investigation (CBI) into the alleged killings.

The matter was listed before the bench of Justices Arun Mishra and M R Shah on September 2.

The petition sought justice for 6732 deceased who were stated to be victims of encounter killings, custodial deaths and illegal cremations by the Punjab police in 26 districts of Punjab during the insurgency period 1984-85, starting from Operation Blue Star and leading up to after the assassination of former Prime Minister Indira Gandhi.

The petitioners stated that the deceased persons were killed in fake encounters or were abducted, kept in illegal custody, tortured and enforced disappeared by the Punjab police and security forces under the guise of security operations. Thereafter, those killed were secretly cremated the dead bodies as being “unclaimed and unidentified”.

It was also clarified at the outset that the petition sought investigation into extrajudicial executions of persons apart from those that took place in the three crematoriums at Amritsar, Tarn Taran and Majitha as the proceedings for those three crematoriums were dealt by the Supreme Court in Prithpal Singh & Ors. v. State of Punjab, (2012) 1 SCC 10.

Breach of Fundamental and Statutory Rights of Victims and their Families

1. The breakdown of law and order in Punjab at the alleged time led to crimes against humanity in the guise of fake encounters, enforced disappearances and custodial killings by the Punjab police officials, costing lives of over 8000 persons. This amounted to violation of the Right to life and personal liberty guaranteed to all citizens under Article 21 of the Constitution.

3. There has not been any acknowledgement, investigation or inquiry into cases of these persons who went missing through abductions and fake encounters and they remain unaccounted for till date. Resultantly, death certificates have not been issued to the families of these victims who, by dint of the same, face difficulties in matters of inheritance, succession and are denied employment on compassionate grounds, statutory entitlements and dues, pensions and government subsidies.

4. The cremation for unclaimed and unidentified took place from year 1984 to 1995 during insurgency operation. However, by 1995 when the militant movement was crushed, the corresponding numbers of cremations reduced considerably proving that these cremations were linked with Police disappearances.

5. The Punjab police claim that they never had any of the disappeared persons in their custody at any time while the data collected from cremation grounds and the Municipal Corporations indicate that those persons were taken to cremation grounds by the police in most cases and clandestinely burnt.

6. The dates of killings and abductions of some 274 persons from the Gurdaspur district matched with the date of FIRs, date of receipt books for the purchase of firewood and cloth for cremation, the dates of cremations and numbers of bodies brought for cremation. However, the records are merely “the tip of the iceberg” and if CBI investigates the matter, then a significant number of such cases will be identified.

7. In many of the cases, the FIR flatly contradicted that the deceased person was unidentified as his particulars, were either disclosed in the FIR itself or information containing their identity was contained in the police file. Thus, the Police party was aware of the identities of the deceased victims and yet they were cremated as unclaimed and unidentified.

8. The mandatory procedure to be adopted for cremating unidentified and unclaimed dead bodies is governed by the provisions of Punjab Police Rules, 1934. However, the same was not followed in any case and the cremation was effected in illegal, unconstitutional and arbitrary procedure.

9. The need for a through and independent Judicial probe is crucial because many police officers implicated in these killings are also implicated in a number of other crimes, which form a nexus between certain police officers from this period and the destructive drug trade in Punjab, corruption and unlawful acquiring property and sexual offences.

10. Many officers accused of serious human rights violations during this period have been awarded for bravery or have been promoted to the high ranks. This has exemplified the immunity and impunity such police personnel enjoy.

11. A former officer of the Punjab police, Gurmeet Singh Pinky had publicly confessed that the Punjab police had formed death squads, during the 1980s to mid-1990s, who had tracked and killed Sikhs in Punjab and other states, with impunity, with the close cooperation and collusion of regional police forces.

12. The State of Punjab not only failed in maintaining the rule of law in the state but also allowed its own officials to commit human right violations by breaching standard legal procedure to be followed by the Police, for the detention, arrest and interrogation of suspects.

13. The Punjab Police officers commonly threaten families of the victims so that they don’t approach any authority or the judiciary against the unlawful acts committed by the officers during their tenure of service.

14. The Supreme Court in “Extra Judicial Execution Victim Families Association v. Union of India & Anr.”, had intervened in the Manipur case of extra-judicial killings and disappearance of 1528 persons and ordered an independent investigation by the CBI for effective remedy which later concluded that the “encounters were not genuine and that the use of force of the State agencies was excessive”. A similar probe was required herein.

15. The Supreme Court had transferred the investigation related to the three crematoriums in the Prithpal Singh case to the CBI which aided a fair investigation and lead to convictions of a number of Punjab police officers.

16. The Supreme Court had noted the impartiality of the Punjab Police in the Prithpal Singh case in as much as it said “In spite of transfer of the investigation of the case to the CBI, the Punjab police officials did not cooperate with the CBI and were not lending proper support in conducting the investigation. The police officials of Punjab united in an unholy alliance, as their colleagues were involved as the case was going to tarnish the image of Punjab Police…”

17. In a landmark case in UK, “R. v. Sawoniuk, Court of Appeal”, (Criminal Division) [2000] EWCA Crim 9, the court had rejected the defence’s argument that a fair trial could not be conducted given the passage of time (some 58 years). It was held that the defence “needs to show on a balance of probabilities that owing to the delay he will suffer serious prejudice to the extent that no fair trial can be held”. The same principle was followed by the Supreme Court in “CBI v. Sajjan Kumar & Ors.”, Crl. A. 1099/2013.

18. In “Rubabbuddin Sheikh v. State of Gujarat”, (2011) 1 SCC (Cri) 1109, the Supreme Court identified the inherent difficulties in gathering evidence in such cases and the need to punish guilty officers, who malign and tarnish otherwise upright police personally.

19. The petition raises issues of constitutional importance in as much as there is an absence of domestic laws viz. criminalization of genocide, enforced disappearances and crimes against humanity. Thus, there is a positive constitutional obligation on this Hon’ble Court to develop the appropriate mechanisms for redressal and non-re-occurrence.

21.Police’s actions were in violation of the Geneva Convention which provides that dead bodies of enemy combatants are to be identified, treated with respect and not defiled. However, the victims herein who were citizens of India were accorded less rights than a foreign enemy combatant.

22. As per the law laid down in “Naga People’s Movement of Human Rights”, the allegations of excessive force resulting in death of a victim by the armed forces or police must be thoroughly looked into.

Apart from an independent probe by an SIT or CBI, the Petitioner has prayed appropriate directions for:

(i) reparation and rehabilitation of the families of the victims;

(ii) institution of disciplinary proceedings against the officers engaging in criminality;

(iii) issuance of death certificates for the deceased; and

(iv) develop apposite infrastructure to rehabilitate the kin of the victims who have suffered for more than two decades. 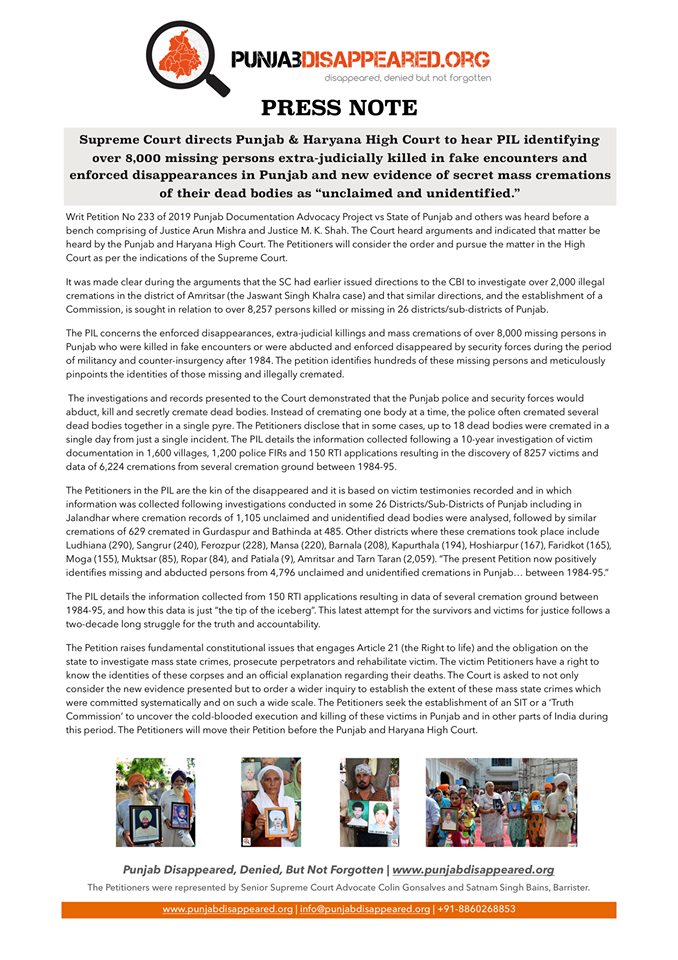 ‘Extrajudicial’ killings in Punjab: SC to hear PIL tomorrow, victims’ kin pray for justice at Akal Takht Sep 01, 2019 01:16 IST HT Correspondent With the Supreme Court on Monday taking up a public interest litigation (PIL) related to alleged extra-judicial killings of 8,257 persons in Punjab during militancy, the families of some victims gathered […]

India: Punjab’s Disappearances Dnews London Fri, 30 Aug 2019 18:01 GMT “After 10 days (of detention), he was killed. When you have already killed our son, kill us too,” says an elderly gentleman from Punjab, a state bordering Pakistan in India. These are the opening lines of the trailer of ‘Punjab Disappeared’, a 70-minute documentary […]

SC to hear PIL on missing persons tomorrow Families of persons missing during the militancy period gather for ardas at Akal Takht on Saturday. Tribune photo: Sunil Kumar Tribune News Service Amritsar, August 31 The Supreme Court will hear a PIL on September 2 related to mass cremation of 8,257 missing persons in Punjab, who […]

Punjab killings: SC to hear PIL on September 2 Japnam Bindra The PIL has been filed allegedly on the basis of new-found evidence The PIL lists the detailed information collected from 150 RTI applications, resulting in data from several cremation grounds between 1984 and 1995 The Supreme Court will, on Monday, hear a Public Interest […]

The Supreme Court of India will hear a Public Interest Litigation (PIL) related to the enforced disappearance, extra-judicial killing and mass cremations of over 8,000 missing persons in Punjab who were killed in fake encounters or were abducted and forcefully disappeared by security forces during the period of militancy and counter-insurgency after 1984. The petition […]