The film traces the work of the Punjab Documentation and Advocacy Project (PDAP) and the pioneering work of Punjab human rights activist Jaswant Singh Khalra in uncovering the identities of thousands of previously unidentified bodies cremated from early 1980 to the mid 1990s.

The film also sensitively narrates the plight of thousands of victim families across India’s troubled and conflict-ridden states.. Those whose kin have been disappeared or killed, without redress, converged in a unique and touching display of collective grief, resilience and solidarity.

The right to life is the most sacred and fundamental human right. The documentary explores the complex and multi layered protection, immunity and impunity provided by the State to law enforcers themselves accused of mass killings.

It narrates the struggles of its survivors: Fathers, husbands, brothers, sons and sometimes, mothers, wives, daughters and sisters, were abducted by police or security forces, tortured and ultimately killed. The stories of these victims and their families’ subsequent struggle to find answers to their question – ‘what happened to our loved ones?’ unfold through the vehicle of an Independent Peoples’ Tribunal (IPT), a two-day public event that took place in Amritsar.

The statements of survivors are punctuated with a running narrative with explanations of the background facts and figures of how the abductions and killings took place and how the identities of the missing were matched to cremation records of unclaimed and unidentified dead bodies.

In the documentary, perhaps for the first time a divergent analysis of a former Supreme Court judge, prominent lawyers, activists, human rights defenders victims is transposed against the chilling confessions of the killers and perpetrators involved in these mass crimes. The film draws parallels with Manipur, Kashmir and Chhattisgarh and describes how, even today, the security forces in India act with such a brazen sense of impunity and immunity.

The documentary takes the debate and discourse from the shadows and questions how systematic and indiscriminate killings have been justified in the name of combating insurgency in which the State must acknowledge and disclose what happened to the victims disappeared kin. 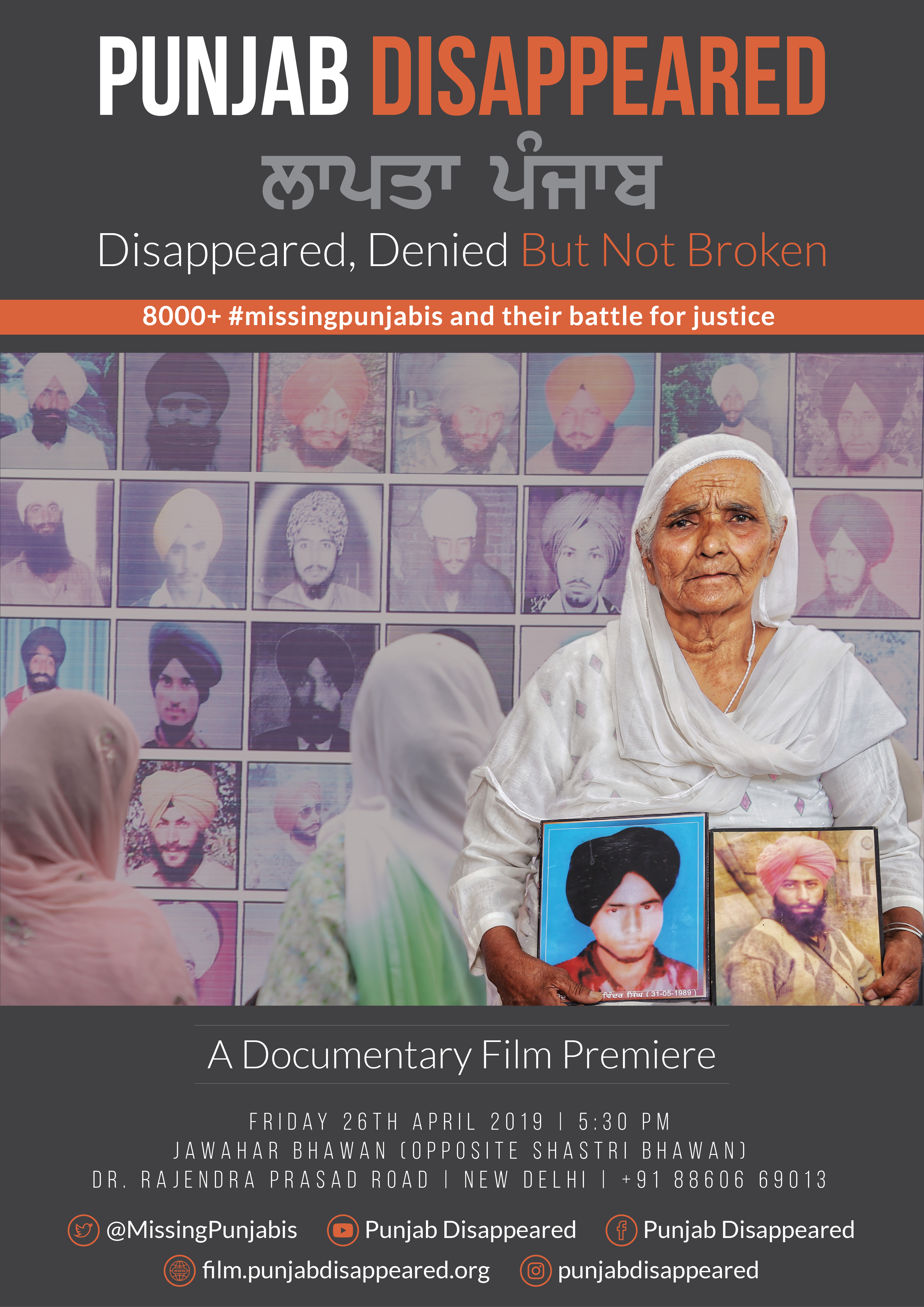 The viewer is taken through an often-emotional journey of grief, fear and despair, but ultimately the film carries a message of hope and resistance.  It is a clarion call for the state and civil society to take action now, for truth, justice and reparation, and most importantly for non-repetition. The film is not just for the victim families of Punjab, Manipur or Chhattisgarh or Kashmir but for India. In the words of one Manipuri activist, “if we don’t learn from history, we are destined to repeat it”.

Punjab Disappeared highlights the ten year work of the PDAP, which has uncovered 8,257 cases of extrajudicial executions, disappearances and mass secret cremations and its latest attempt to litigate these cases before the Supreme Court of India.  But above all it relays the powerful resilience of these genocide survivors, formed against the odds, taking their epic battle for justice a step further in demanding justice, accountability, non-repetition and change.