Punjab Government move to secretly release up to 15 police officers convicted of Fake Encounters and Extra-Judicial Killings is unlawful, arbitrary and unconstitutional.

We the undersigned are united in our condemnation of the Punjab Government reported decision to recommend to the central government the premature release of Punjab police officers whose names have not been disclosed but have been convicted of heinous crimes during the insurgency and counter-insurgency period, is unlawful, arbitrary and unconstitutional. The CBI Special Court has convicted a number of Punjab police personnel for offences including murder, abduction with intent to murder, kidnapping, extorting money, preparing fake records, fabricating evidence and secretly and illegally cremating dead bodies as “unclaimed and unidentified”.

With the CBI special Court in Mohali, having recently convicted 9 police officers in 4 separate trials, any attempt to release those already serving sentences make a mockery of the law and undermines efforts to secure justice in remaining 40 cases which are pending in the CBI Court Mohali or the Punjab and Haryana High Court.  In all these cases the victims were found to be innocent and the police officers were found to have killed in cold blood or had abducted and enforced disappeared the victims.

We strongly oppose any external attempts by the Punjab or Central Government, or Punjab Police to interfere with the judicial process and prosecutions which were undertaken by the CBI over two decades ago and are now resulting in convictions of police officers who have evaded the law for the last two and half decades.

We take serious issue, with the contention that a “sympathetic view” or leniency should be shown towards those convicted of these heinous criminal offences, which are aggravated by the perpetrators doing so in police uniform. Whilst the majority of the accused in these cases have never been dismissed from service and have enjoyed all the perks, salaries, in many cases pensions throughout their entire career and have been supported by a secret fund even as convicted criminals. Whereas, the victim families have suffered in abject poverty, with the main breadwinner of their family having been murdered in cold blood and have waited endlessly over 26 years for these trials to commence and conclude, which have been delayed by the manipulation of legal procedures by certain accused police officers and arbitrary stays imposed.

The names approved and/or recommended for release should be disclosed immediately so that the victim’s kin can challenge why this move is arbitrary, illegal and unlawful.

We remind the Chief Minister of Punjab, his public commitments to the victims of extra-judicial killings and enforced disappearances that his government would punish and prosecute offenders and that these killers in uniform do not remain above the law. We have every expectation that justice will be done and those serving life sentence, will remain behind bars.

Read how the press covered the screening of our documentary Punjab Disappeared as well as our recently filed PIL in the Supreme Court of India regarding 8257 cases of enforced disappearances, extra-judicial killings and secret mass-cremations. 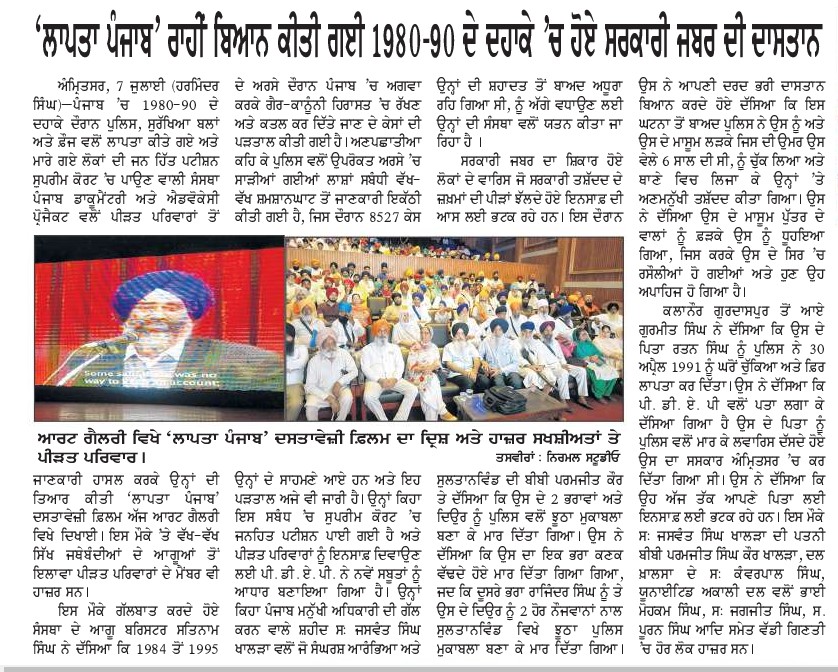 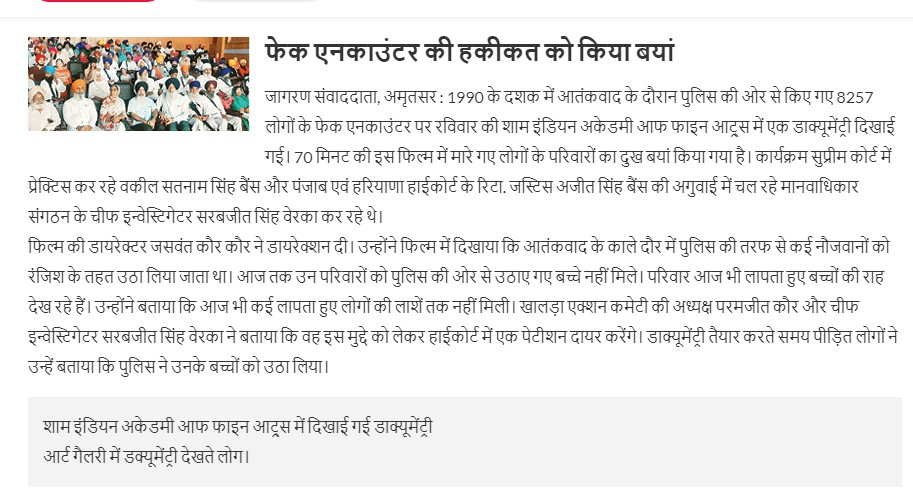 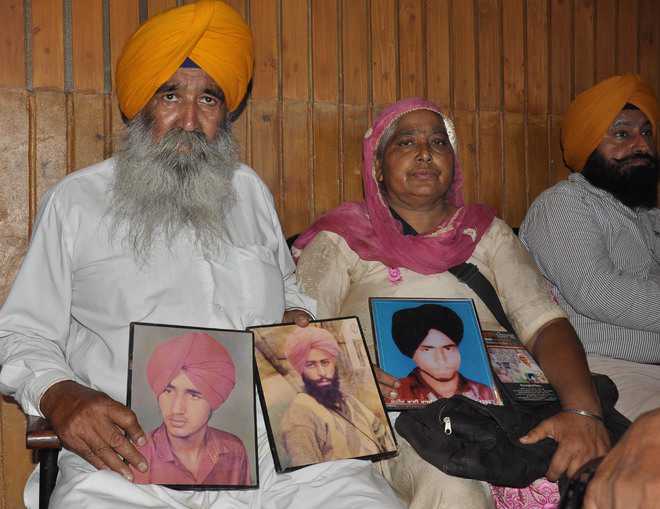 The matter of extra-judicial killings during the militancy period in the state has reached the Supreme Court. Family members of victims of alleged fake encounters by the state police along with Punjab Documentation and Advocacy Project (PDAP) have filed a public interest litigation (PIL) in the apex court seeking setting up of a commission to uncover the truth and provide justice to them.

The PDAP, a human rights group, has identified 8,257 victims who disappeared after being picked up by cops between 1984 and 1995. During the decade-long investigations, the organisation members visited 14 districts of the state.

Advocate Satnam Singh Bains of the PDAP said the organisation provided evidence with the petition to the Supreme Court. Their investigation covered people from other communities who were also killed in fake encounters.

“For the past three decades, the victim families were struggling for justice and accountability,” he said, adding that the PDAP uncovered compelling evidence of 6,140 illegal cremations by the Punjab police. It also provided evidence of 1,400 encounter FIRs claiming that the victims were unidentified militants.

The PDAP today screened a documentary “Punjab Disappeared” uncovering the decade of enforced disappearances that took place in Punjab.

A PIL concerning disappearances & fake encounters of over 8,527 Punjabis has been filed in the Supreme Court by the Punjab Documentation & Advocacy Project (PDAP) following a 10-year investigation of cases of abduction, illegal detention & extra-judicial killings during the period of militancy in Punjab between 1984-95. The announcement coincides with the screening of Punjab Disappeared (Laapta Punjab) which details the investigation and the victims’ struggle for justice & accountability. The PDAP has uncovered new & compelling evidence of 6,140 illegal cremations of dead bodies by the Punjab police that took place between 1984-95 in 14 of Punjab’s 22 districts. The Supreme Court petition also provides evidence of 1,400 encounter FIRs which claim that the victims were unidentified militants. However, our investigation revealed that the identities were known to the police and the victims were murdered in police custody.

The petition also identifies hundreds of these victims across Punjab who were cremated as ‘unidentified & unclaimed’ & provides on evidential basis for the setting up of a ‘Truth Commission’ to uncover as many as 25,000 victims who disappeared in Punjab during the period of militancy. The documentation, investigation & data-analysis presented in the PIL is one of the largest exercises of human rights data collection and investigation into mass cremations undertaken in India.

We would like to cordially invite members of the Press for a press conference & screening of  documentary ‘Punjab Disappeared’, a documentary that shines new light on the decade of disappearances, extra-judicial killings & secret mass cremations in Punjab, highlighting how mainly young men between the ages of 16 and 35 were abducted by the Punjab police.
It traces PDAP’s work in furthering the pioneering work of murdered Punjab human rights activist Jaswant Singh Khalra & gives fresh hope to survivors in their 25-year struggle for justice.

Link to the trailer: https://www.youtube.com/watch?v=rONhLvZXqII&t=34s

About the Organisers: PDAP is an independent human-rights group that is committed to advancing the cause of human rights, justice & accountability for victims of enforced disappearances in Punjab. 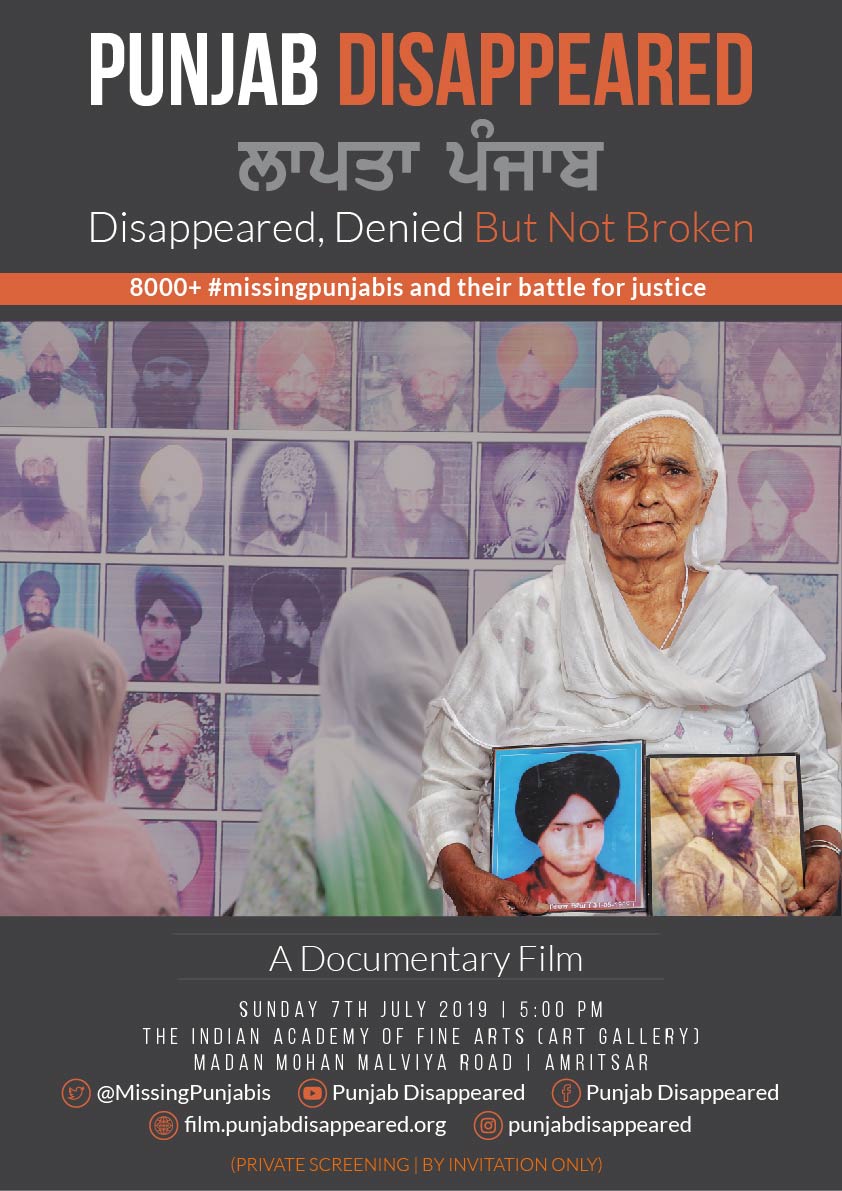 PUNJAB DISAPPEARED IS COMING TO THE HOLY CITY – AMRITSAR

We warmly welcome you to the screening of Punjab Disappeared a 70-minute documentary which uncovers the decade of enforced disappearances, extra-judicial killings and mass secret cremations that took place in Punjab. Thousands of people, mainly young Sikh men disappeared after being abducted by the Punjab police, murdered in staged encounters and their bodies cremated as unclaimed and unidentified.

The film traces the work of the Punjab Documentation and Advocacy Project (PDAP) furthering the pioneering work of Punjab human-right activist Jaswant Singh Khalra in identifying thousands of previously unidentified bodies from new evidence, and gives fresh impetus to the survivors’ 25 year struggle for justice.

The stories of the disappeared, and their families’ subsequent struggle to find answers to the question – ‘what happened to our loved ones?’

The documentary critiques the significance of the Punjab conflict and whether lessons from Punjab were learned in the context of contemporary mass state violence in India: Midnight knocks, people are taken, never to be heard from again. The multi layered cover up of these mass crimes is critically examined and the despite endemic failures of state institutions, the struggle for justice and accountability is enduring.

The viewer is taken through an often-emotional journey of grief, fear and despair but ultimately the film carries a message of hope and resistance. It expresses solidarity, support and a shared desire for justice with survivors from Manipur, Kashmir and Chhattisgarh. With difficult and searching questions of how security forces in India are still able to act with impunity, the film contextualises the relevance of the Punjab conflict to the victim families of other conflicts in India.

Punjab Disappeared is a clarion call for the State and civil society to take action now, for truth, justice, reparation, and non-repetition through the indomitable spirit, dignity and determination of its survivors.

Please note this is a private screening by invitation only. 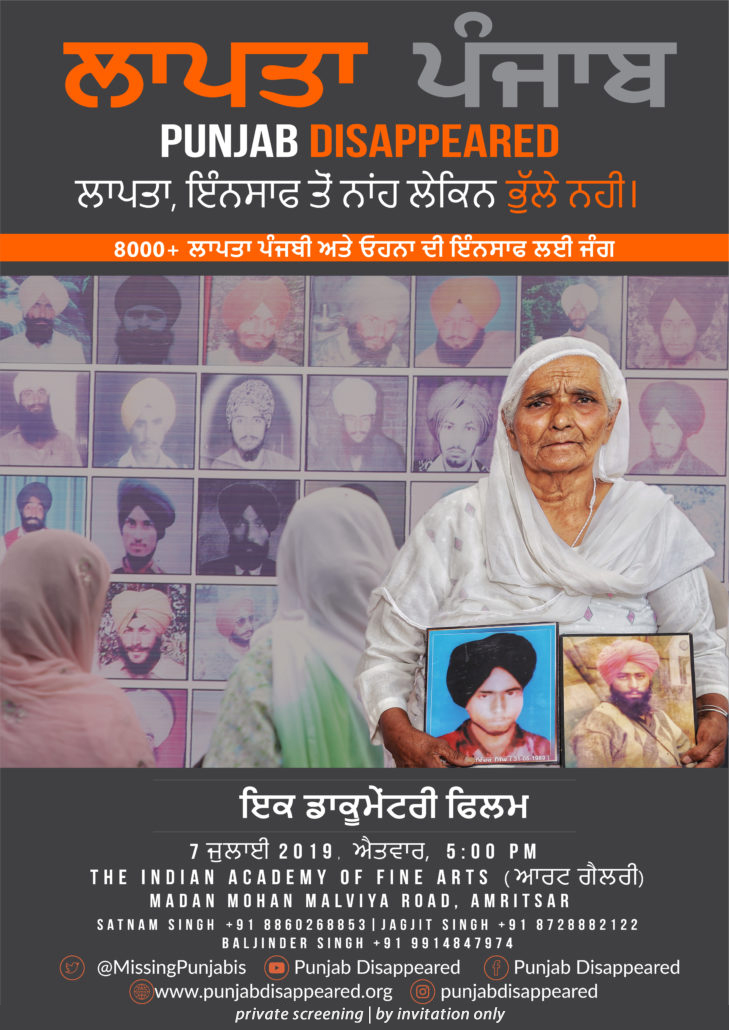 Film on missing youth of Punjab calls for justice

A documentary on the alleged disappearances of thousands of youth from Punjab during the 1980s and 1990s was screened in Delhi here on Friday evening seeking to reignite the spark to seek justice for the victims.

Satnam Singh Bains, a barrister in the United Kingdom and human-rights activist, making the opening statement, said: “This documentary takes you to the deepest and darkest hour of Punjab. It’s about the desire to seek justice and renew the spark for justice for the disappearances that took place between 1984 and 1995”.

He quoted the Khalra Commission that documented 8,257 killings. “Victims were killed and cremated as unidentified”, he said. The documentary claimed the extra-judicial killings were done by the “Punjab Police, paramilitary and the armed forces”.

The 70-minute documentary follows the story of victims of alleged disappearances and extrajudicial killings, whose bodies were secretly cremated in a decade of armed conflict. The victims’ ongoing fight for justice highlights the work of a murdered human rights activist, Jaswant Singh Khalra, and a 10-year investigation that has uncovered new evidence of thousands of previously unknown secret cremations from which victims have been identified.

The documentary highlights the determination and resilience of the victims in their two-decade-long struggle before the courts for the truth, justice and accountability.

During the 1980s and 1990s, as the Khalistani movement for a separate homeland for Sikhs gained traction, an unprecedented rise in insurgency and violence was witnessed. In response, the state carried out several counterinsurgency operations, leading to massive rights violations. The true extent of this violence is slowly surfacing in the public domain, claims the group ‘Punjab Disappeared’ which has worked on the documentary.

The documentary looks at extra-judicial killings and mass cremations in the state during the 1980s and 1990s. It presents new evidence of previously unknown killings, cremations and disappearances.

Read the original article on The Tribune website here.

Our campaign has now officially commenced to submit our findings to the Supreme Court of India to investigate and deliver justice to all victims of disappearances and killing across Punjab commencing with these 8257 cases. The PDAP is pleased the matter has received positive coverage in the Indian media

Please find below the details with the web links:

NGO for CBI probe into 8,257 going missing during militancy days

The civil rights group claimed that 8,257 people are missing because of “illegal killings” during the militancy period in Punjab.

Here is all about PDAP and Punjab Disappeared's mission of counting Punjab’s disappeared and dead during militancy. They now plan to knock Supreme Court's door to get justice for 8257 cases with a new report prepared from 2008-2017

Posted by News18Punjab on Saturday, 2 December 2017

Identifying the unidentified PDAP to release a report on enforced disappearances fake encounters in Punjab.