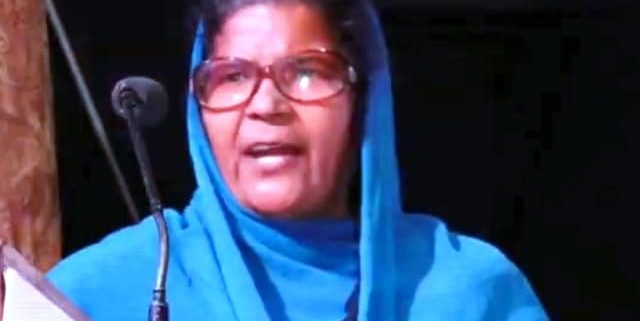 Kulvinder Kaur was 32 and pregnant when her husband Paramjeet Singh was picked up by Punjab Police from a train compartment, never to be seen again. LokMarg spotted Kaur, now 60, in a documentary Punjab Disappeared and spoke to her about her journey for justice

My daughter, Paramveer, was born two-and-half months after her father “disappeared”. I use the word disappeared because even though our village knows he was picked up by police, and there are several witnesses to it, police records would only show him as “missing”.

In her growing years, Paramveer would often ask: Mere Papa kahan hai? Photo mein toh hain, par humaare bed pe nahin sotay? (Where is my father? He is in the family photograph, but why wouldn’t he sleep on our bed?).

How do you explain to a child that her father was killed by police on suspicions of being a terrorist? And that we could not even get to see his dead body. For us, he just disappeared. We never got a chance to say goodbye.

Paramveer grew up and as the answers to all her questions were revealed to her, slowly. They say time is a great healer but not in our case. Our wounds are beyond repair. I often ask myself, why us? Why my family? Was it because my husband felt disillusioned by the system? Were we punished because we chose dissent?

Paramjeet and I got married in January 1986, this was two years after he had resigned from Bihar Police in protest against desecration of our Harmandir Sahib (Golden Temple). This act of dissent cost us dear. After he returned to his native Tugalwal in Gurdaspur, the police found him to be an ideal scapegoat. He would be picked up by the police for “questioning”. Several false allegations were levelled against him. He was labeled ‘communal’ and ‘anti-Hindu’. All of which was untrue.

We never managed to create a home together. The five-and- half years of our marriage were dotted with police harassment. Paramjeet would routinely called to police station for questioning, and many times tortured. If he was not around, they would take my father-in-law for questioning. In the years that we were married, we could not even spend three months together.

In April 1991, my sister-in-law and I went to Amritsar to offer prayers at Golden Temple. I was pregnant and hopeful that life will get better with the arrival of the baby.

Paramjeet was to join me later. Little did I know that the trip would cost him his life. Paramjeet boarded the train for Amritsar from Pathankot. The police were waiting for an opportunity to get him outside the village so that there were no witnesses. They raided the coach he was travelling in and arrested him in Gurdaspur.

A few acquaintances, who used to travel daily on that route, witnessed the arrest and informed our family back in our village. The following day, a few villagers accompanied by the sarpanch visited the police station to enquire about Paramjeet’s arrest, but to no avail. The staff at the station kept making excuses such as the SSP and SHO were busy in meetings.

Some of the villagers, who were having tea at a nearby tea-stall, overheard some policemen talking about Paramjeet’s “encounter”. Shocked by this information they again requested the police to confirm if he was in their custody. Two of the villagers in the group were then shown Paramjeet’s body by a few sympathetic police personnel. But they were asked to keep their mouths shut.

The villagers informed our parents and we rushed to the police station. We pleaded the police to handover Paramjeet’s body, so that we could perform the last rites but they denied his presence.

We hear, police cremated him secretly, like thousands of others. All I am left with of him are a few of his belongings. His photographs and a couple of letters he wrote to me when he was in prison.

I was discouraged to pursue the case with the authorities and took it as my fate. Besides, I had other responsibilities, like raising my daughter and running a household amid all financial constraints. I worked as a school teacher and was the sole bread-earner in the family. I tried my best to fill in as a son for my mother-in-law and as a father for my daughter. I may have been successful to some extent. But the vacuum remains.

There are thousands of other families, who suffer the same vacuum. Innocents were killed and illegally cremated in the name of counter-insurgency operations in Punjab. Paramjeet was just one of them. If there is something called divine justice, his perpetrators will be punished.

(The documentary Punjab Disappeared was screened at Jawahar Bhawan, New Delhi, on April 25, 2019 and was attended by Kulvinder Kaur, who also addressed the audience at the event)

A Review of ‘Punjab Disappeared’. The Documentary UK Premiere By British...
Scroll to top