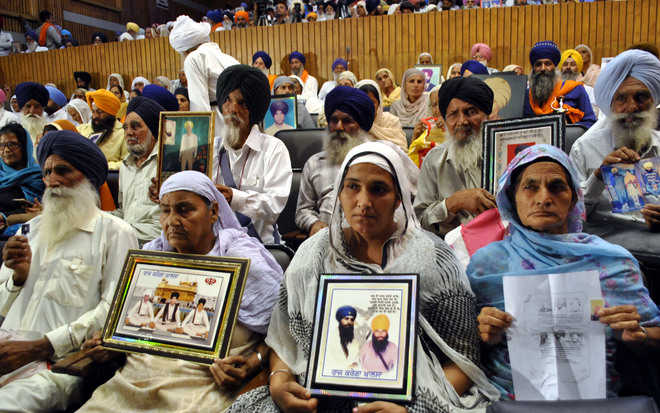 Family members of youths killed during the militancy period, in Amritsar on Saturday. tribune photo

The Independent People’s Tribunal (IPT), an outfit of human rights organisations, will collect information on extra-judicial executions and enforced disappearances during the militancy era to the Supreme Court.

Senior SC lawyer and Director, Human Rights Law Network, Colin Gonsalves, said, a collective case of such executions and disappearances would be prepared in the next six months and it would be filed in the apex court. After the verdict of the SC in a similar case in Manipur, hope for the affected families of Punjab for justice has rekindled.

Retired SC Judge AK Ganguly, said, it was disappointing that the courts did not take notice of human rights violations in Punajb at that time. Such violations were undergoing in Manipur, Chattisgarh, and Jammu and Kashmir.

Groups of victims from these states must approach the judiciary to direct the governments concerned to reform its working, he added.

Advocate Barjinder Singh Sodhi from Patiala, who is pursuing such cases, said justice has not been delivered in the case of the cremating 2,097 unidentified bodies and investigation was started only in 30 cases.

The organisations today came together to form the IPT to discuss – Punjab Disappeared: On extra judicial executions and enforced disappearances during days of terrorism’ for two days starting today.

Family members of about 400 affected families from Gurdaspur district participated and narrated their cases.