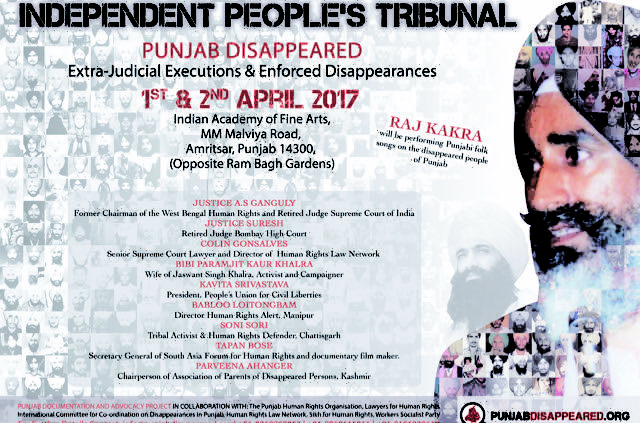 The IPT will hear testimonies of hundreds of forgotten victims whose loved ones were disappeared and many of whom were cremated as “unclaimed and unidentified” by the Punjab Police in 22 of Punjab’s districts. The Tribunal will provide a unique insight into

the practice of disappearances and extra-judicial killings by taking a victim based approach, offering a platform for the victims to depose before the panel their experiences.

The IPT will hear experiences of lawyers, activists and NGO’s who have pursued cases and struggled for justice and accountability in Punjab.

The Punjab mass disappearances during the Punjab conflict have not received the importance and attention they deserve. An overwhelming number of victim’s voices have never been heard in the public domain. The majority have been awaiting basic acknowledgement, accountability and redress. In a tiny minority of cases which could be pursued through the Courts the victims have been grounded down by the endless facades of litigation.